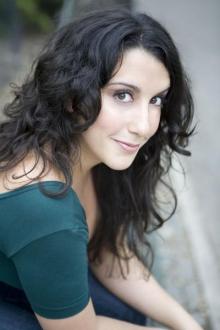 Giulia Rozzi is a comedian, actress and writer that has been seen on Tru TV's How To Be A Grown Up, Vh1's The Greatest, Chelsea Lately, Comedy Central's This Is Not Happening, The Jim Gaffigan Show, Lifetime TV, Playboy TV's Foursome: Walk Of Shame, MTV, TLC, The Artie Lange Show and co-stars/co-created the web series Seeing Other People with Brooke Van Poppelen. A relatable storyteller, her very personal and honest humor has earned her the honor of being a Moth GrandSLAM champion, a Boston Comedy Festival finalist, and a TEDx speaker.   As a writer, Giulia has worked on the MTV series Girl Code and Silent Library and was a contributing writer for Bravo's Odd Mom Out and TV Land's Younger. She has also written and performed two solo shows: Stupid Foreigners and Bad Bride (which toured the US and UK). Giulia also co-created/hosts the groundbreaking and long running sex  themed storytelling show Stripped Stories with Margot Leitman  and co-hosts the relationship podcast Hopefully We Don't Break-Up on Cave Comedy Radio with comedian Will Miles. Her new comedy album Touch My Heart debuts February 2016 on Comedy Records.  More at giuliarozzi.com