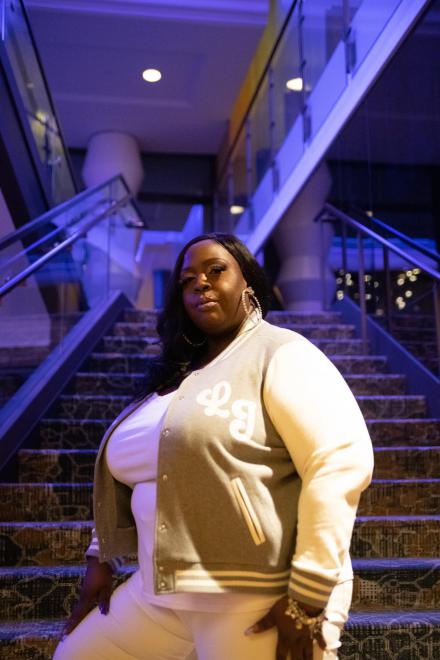 When life throws me lemons, I freeze them and throw them back. I was born and raised in Grand Rapids MI, lived in Detroit for a while but came back to GR at a yoyung age. Life has never been easy for me, but I always found a way to find humor in whatever life threw at me. I come from a family of undiagnosed nuts, and dys-function is how we function. I started doing comedy in 2019, after going to a show at Wealthy Street Theater where Dave Jones was hosting. I told the ladies I was with, at the show that this is what I want to do next. Once they all stopped screaming with joy, we celebrated me entering the comedy world and I hit the ground running. I have performed mostly in Grand Rapids with hopes of venturing out soon. I have hit the stage for Laugh & HipHop GR, Real Laughs & Fake Lashes Comedy Show, Family Reunion Comedy Show, LaughFest, Black Laughs Matter Comedy Show, Wealthy Street Theater Labor Day Weekend Comedy Show. I was a co-host on SnellVision Podcast, which was a podcast my with brother singer/song writer j. Snell from 2019-2020. It was halted when covid hit!! Once covid took over the world my world partly ended. I lost my father and step mother to covid March and April of 2020. The world stop moving for quite some time for me. Although trapped in my parents home in Detroit for 2 months due to quarantine my brother, my daughter and I found ways to stay sane. By Fall of 2020 my family and friends were tired of my shenanigans and it was time to get back on the stage. And so I did, since then I have landed a role in "Declined The Movie", a film now available for live streaming on Vimeno. I perform monthly at Ambrosia Theaters Stand Up Comedy Night. I host several events including but not limited to Baby Showers, Rich Auntie Brunches, Karaoke Nights, Bachelorette Parties, and many more, with Sparkle All the Time. What is next for me I am looking forward to doing a Covid Memorial Comedy Show in Detroit to honor my parents and other families effected by the virus. I hope to soon be back on the stage for LaughFest, landing more movie roles and possibly starting my own Podcast. my ultimate goal to to land the Netflix Special I told my Father I would.